YouTube TV needs more channels, but it gets the basics right 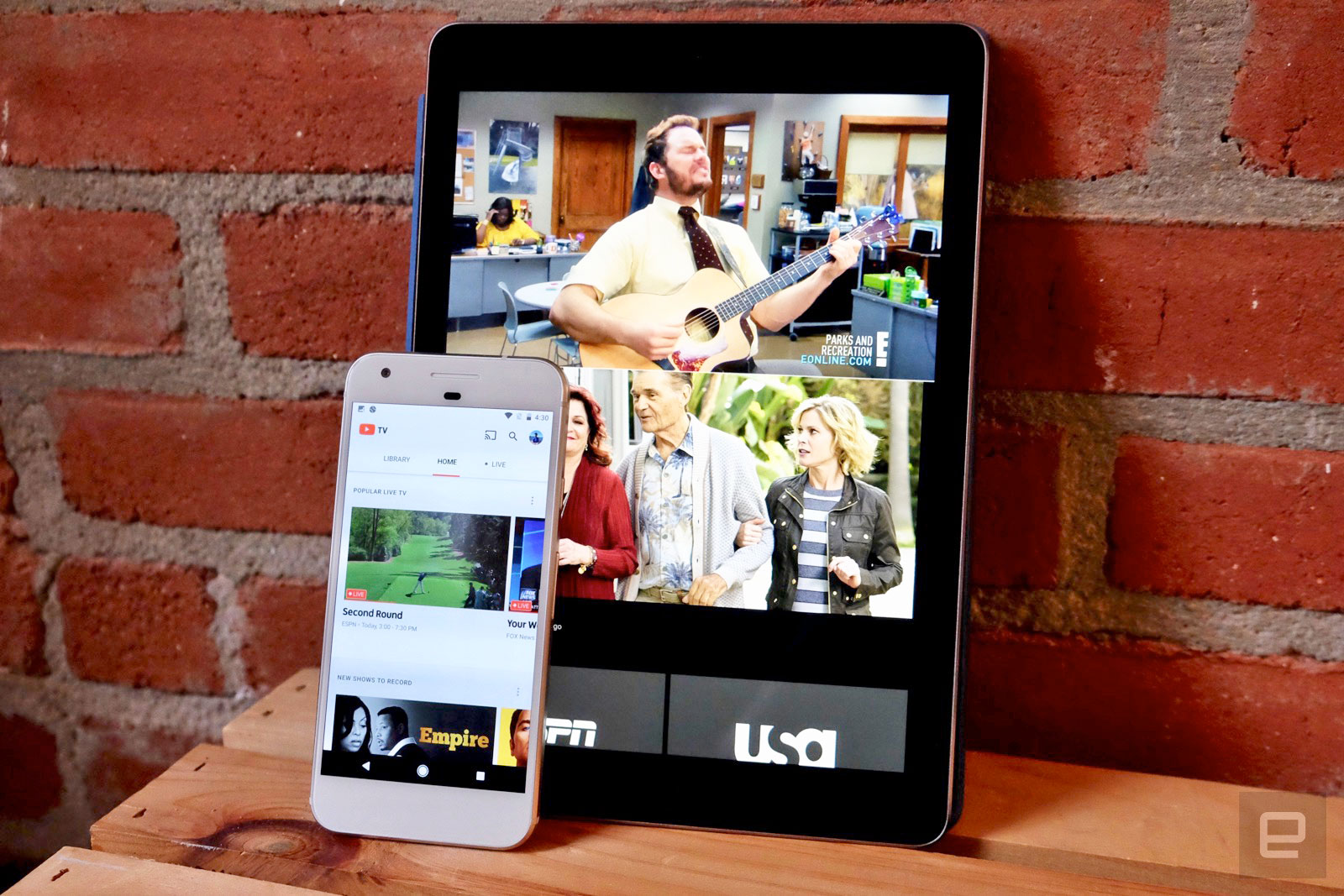 YouTube TV launched earlier this week, bringing another option to the quickly growing online TV subscription space. It’s basically the cord-cutting dream; being able to watch shows, news or sports as they happen instead of waiting for your favorite sitcom to show up on Hulu the next day. Of course, YouTube TV and its competitors (which include Sony’s PlayStation Vue, Sling TV and DirecTV Now) all have their flaws. There isn’t a perfect option out there yet, but after spending the better part of the week watching YouTube TV I can say it definitely has some things going for it over the competition — but it’s also pretty clearly a service in its infancy.

Probably the most important question when looking at a streaming TV service is whether it has the channels you need. Unfortunately, it’s getting harder and harder to do a true comparison between these four streaming services, as all of them besides YouTube offer multiple package at different price points. YouTube TV’s offering gets you 39 channels plus access to YouTube Red original series for $35 a month. 10 more channels are coming soon, and you can add Showtime or Fox Soccer Plus for $11 or $15 a month, respectively. Users can add up to five additional family members to their plan, too. Here’s the complete channel lineup:

Highlights include local and national programming from all four major networks, sports from ESPN and Fox Sports, plus major cable news networks MSNBC, CNBC and Fox News. YouTube is also adding AMC and BBC America soon, though there’s no timeframe yet. Big omissions compared to the competition include TNT, TBS, Cartoon Network, Comedy Central, MTV, CNN, Lifetime, Animal Planet, Nickelodeon and many others. While the simplicity of YouTube TV’s plan is appreciated compared to the complex options the most over-the-top providers offer, there’s no doubt that YouTube TV trails the competition in sheer channel numbers.

Assuming the current channel lineup works for you, there are still a few things to know before you try and sign up. For starters, YouTube TV is only available in New York, Los Angeles, San Francisco, Chicago and Philadelphia — if you’re not in or around one of those metropolitan areas, you’ll have to wait. I imagine YouTube will move quickly to roll the service out in more cities, but you might have to look elsewhere if you want to cut the cord immediately.

At launch, YouTube TV is only available on Android and iOS devices or via the web. That’ll cover just about everyone, but right now the only way to get the service on a big screen is with a Chromecast. (TVs that have Casting functionality built-in will also work). Google promises to add support for other set-top boxes and consoles going forward, but for now YouTube TV is primarily a phone-first affair.

Provided that all works for you, the next big question is what the experience of using YouTube TV is like. Services like this often have complicated and confusing UI, whether we’re talking about your standard Xfinity cable box or PlayStation Vue. For my money, Google’s done about as good a job as it can with YouTube TV’s interface, managing to tie together four main sections — a DVR-style video library, live content, search and recommendations — in a way that’s not too complicated.

Everything starts from the home screen, which includes recommendations for shows to record, popular live programming, a "resume watching" section with things you’ve started but didn’t finish and a list of various categories to browse. That list includes things like "drama on now," movie recommendations, YouTube Red originals, and a longer "try something new" area that serves up shows you might like based on your history.

It doesn’t take long for these sections to populate with things that were at least somewhat in my wheelhouse. After I started watching a few episode of Parks and Recreation, The Goldbergs and NCIS (I swear it was just for testing purposes), YouTube TV suggested I check out Brooklyn Nine-Nine, The Mindy Project and NCIS: Los Angeles, all reasonable suggestions given what I had checked out at that point.

Every show has its own landing page, similar to what you might find on Hulu or Netflix. It’ll show you all episodes that are coming up, and you’ll also see what’s available on-demand. It’s not clear exactly why certain shows have large catalogs available while others only have episodes you can watch after "recording" their live airings — and that’s one of the trickier things about YouTube TV. It would definitely be helpful if you could see all programs available on-demand, all in one place.

If you add a show to your library from this landing page, YouTube TV will "record" all future episodes and add them to your library as they air.With unlimited storage, there’s no reason to be picky about adding things to your collection. Everything you save will live in the "library" tab, organized into various categories. At the top is a list of everything being recorded or scheduled to be recorded in the near future, followed by your most-watched and most recently recorded shows and movies. Below that you’ll find everything you ever added to your library. Since this can get packed pretty fast, YouTube TV gives you a number of options to sort it. There are filters for movies, shows, sports and events (in the app, those filters are right at the top of the library page). You can also sort either alphabetically or by what’s most popular.

Speaking of sports, YouTube TV handles them in a unique way. You can follow teams across the four major US sports leagues; every time a team you follow plays a game, it’ll be recorded. That’s assuming that team’s game is broadcast on a channel YouTube TV has access to, which may often not be the case. You can also follow the Premier League, Formula One, the PGA tour and a number of others — for sports that aren’t team-based, you can choose to follow everything and have all the live events recorded. It’s one of the better parts of YouTube TV, even if you won’t always find games from the team you’re interested in. 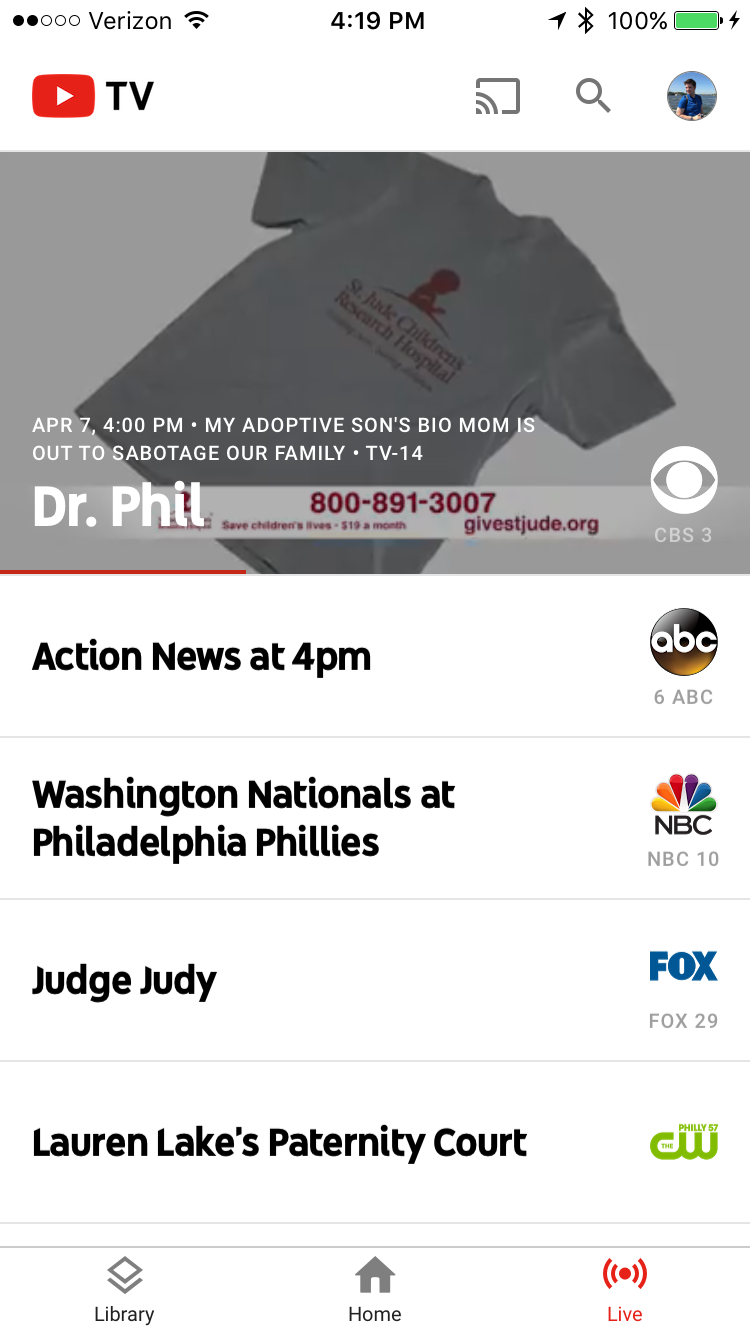 The last major parts of the service you’ll want to know about are live feed and search. When you click on the "live" tab, you get a vertically scrolling list of every channel available to you and what’s currently playing. That list looks great on mobile — the top-most channel takes up about a third of the screen and starts a video preview almost instantly. As you scroll through the list, other channels pop into that slot. If you just want to "see what’s on" and get watching, this is an excellent way to do so. If you want to see what else is on a given network, they’re all listed out in the search tab; you can find what shows are coming up next there.

Unsurprisingly, search is more than just a simple box to type in. By default it shows you a list of genres, networks, trending programs, sports leagues and then types of shows as you scroll. Even if you don’t start typing into search, this page will let you narrow down what you’re looking for and provide you with plenty of things to start watching. When searching, you can obviously look by title, but you can also use natural language to find things like "police dramas" or "sci-fi movies." 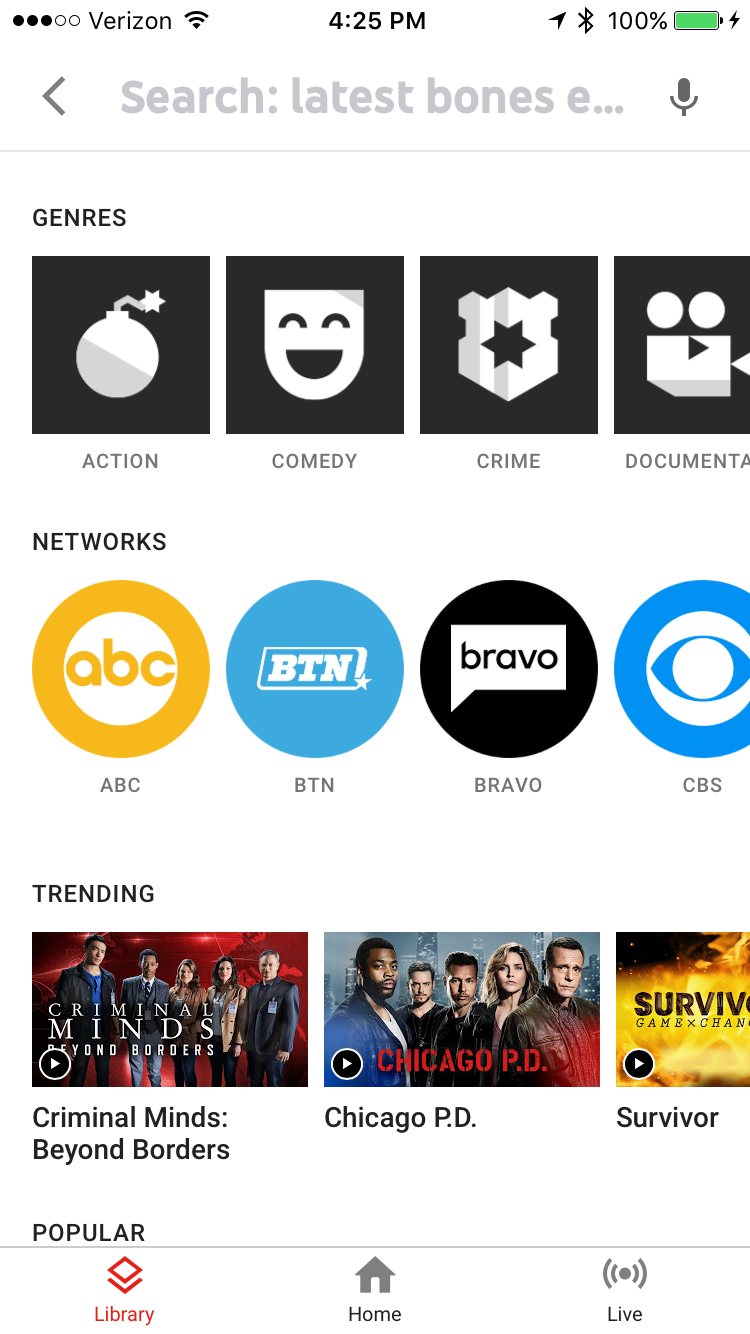 A good video service needs all of these myriad ways of finding and keeping track of your content — but it also needs to be fast and get out of your way when it’s time to watch. Fortunately, YouTube TV succeeds on that count. Live preview and recorded content start up almost instantly; there’s usually a few seconds of buffering before the stream hits peak quality, but from there it’s all good. You can adjust the quality of the stream all the way up to 1080p, just like the normal YouTube app. For now, there’s no 4K content available or any word on when that might happen.

Once you’re actually watching something, the service works just like YouTube’s standard app — just turn your phone on its side to get into full-screen video. Sending YouTube TV to my Chromecast also worked like a charm, making this a viable living room solution if you shell out the cash for Google’s little streaming puck. Streaming live TV looked nearly as good as Netflix or Hulu through my Apple TV. It felt comparable to PlayStation Vue, the live TV streaming service I’ve used the most thus far.

Ultimately, YouTube TV is a solid new option in the growing live streaming TV space. To me, the UI is a lot better than some of the competition, but the channel selection does lag behind some of the packages you can find on Sling TV, PlayStation Vue or DirecTV Now. Fortunately, none of these service make you sign a contract, and YouTube TV is giving a free month to new users. You’ll also get a free Chromecast when you pay for your first month of YouTube TV, which is pretty much essential unless you watch everything on your computer or phone. For my part, I’m sticking with Hulu and Netflix for now — I don’t place that high a premium on live content. If you do, though, a free month of YouTube TV is worth a shot.