Huawei finally has a phone worthy of the Leica brand 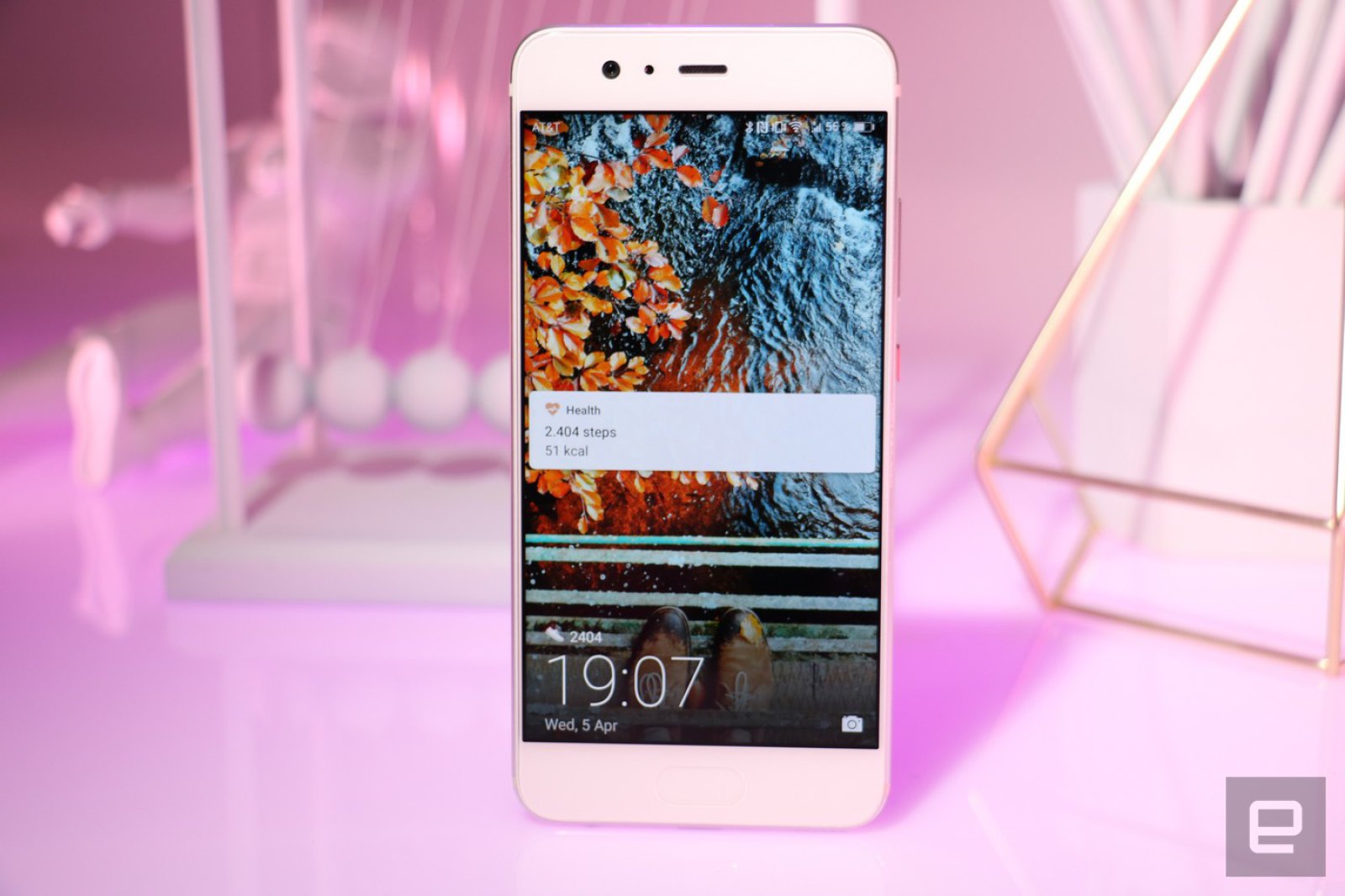 From super-slow-mo cameras and bezel-less displays to banking on the power of nostalgia, smartphone makers have tried almost every trick they can to stand out. Huawei’s latest strategy is to partner with color authority Pantone to come up with a variety of eye-catching hues for its latest flagship. The Huawei P10 (and the slightly larger P10 Plus) will be available in a slew of colors and finishes. But while that’s nice for people looking to personalize their phones, it’s not particularly useful.

What’s actually useful about the new flagship is its powerful camera and reliable performance wrapped in an understated, elegant frame. And although the phones won’t officially be coming to the US for the time being (they’ll sell in Europe starting at €649), they’re still a tantalizing preview of what Huawei might have in store.

Huawei has already proven itself capable of building premium, good-looking handsets, and the P10 is further evidence of that. Its slim 6.98mm (0.27-inch) profile and gently curving edges aren’t just pleasant to look at, they’re a pleasure to hold as well.

Many of my friends have pointed out the P10’s resemblance to the iPhone. And indeed, that’s true of the basic white/gold version I tested. If you aren’t feeling the Apple-esque look, you can opt for one of the many customization options that Huawei offers. Pick a different color — there are seven hues to choose from, including Pantone-approved "Dazzling Blue" and "Greenery." Or try a different finish. You can get a smooth, sandblasted back, a glossy coat or a gritty texture that’s reminiscent of ridged, holographic lenticular cards. That last option is popular with a couple of my coworkers, and it does help the P10 stand out. The colors and textures available vary between countries, though, so you might not be able to get the exact combination you want. 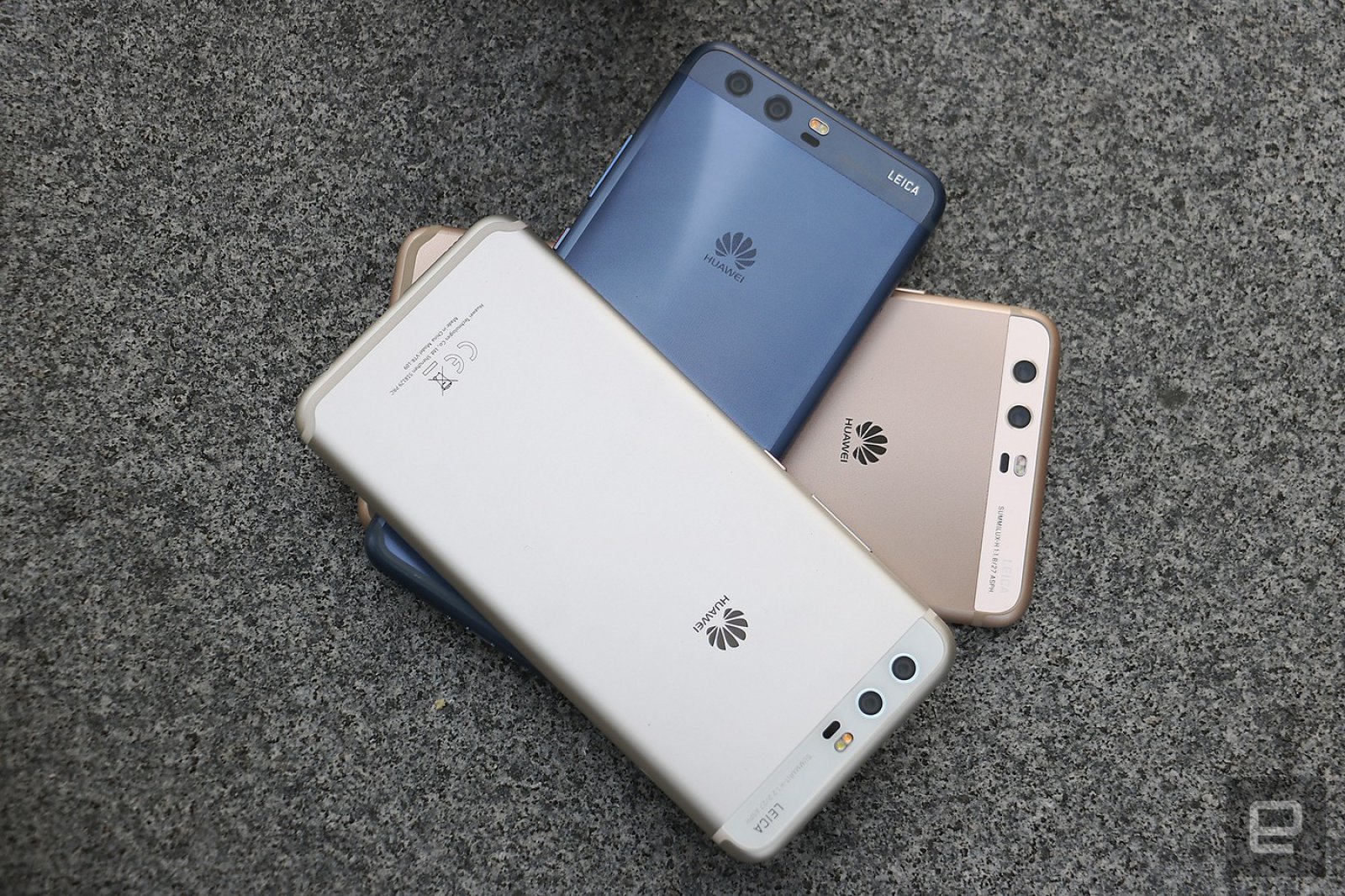 The P10’s 5.1-inch full HD display is sharp and colorful, and while it won’t wow you with richly saturated images or deep blacks like Samsung’s flagships do, it’s good enough for my Instagram and Netflix binges. The same can be said for the P10 Plus’ 5.5-inch WQHD panel, which offers more space for gaming and reading. I just wish both phones were a tad brighter so I could read more easily in strong sunlight.

While we’re on the subject, the P10 and P10 Plus come with screen protectors out of the box. It didn’t bother me but might annoy people who want direct access to the display. The trouble for these folks is that it appears the protector was applied in lieu of an oleophobic coating on the screen, which other phones have in order to avoid fingerprint grease and water damage.

When we asked about the reported lack of this coating, Huawei said, "The P10 is the world’s first smartphone with capacitive under-glass fingerprint sensor for seamless navigation." In layman’s terms, that all but confirms that Huawei did away with the coating to prevent interference with its under-glass fingerprint sensor. The company also said, "For screen protection, we have used premium materials such as Gorilla Glass 5 and include a screen protector as part of the integrated product." Basically, if you want to remove the screen protector (which, by the way, is incredibly difficult), do so knowing you risk damaging the display. 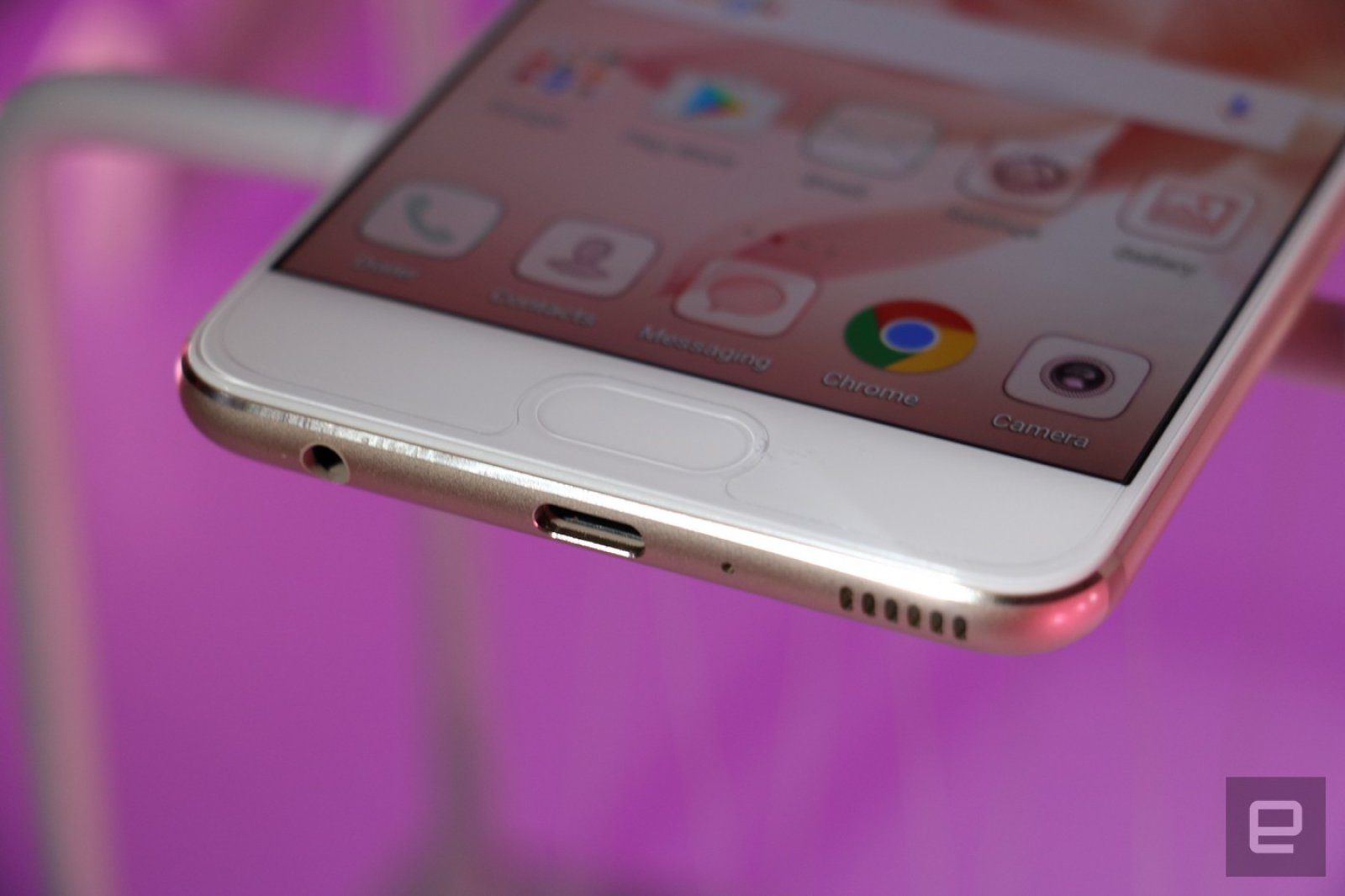 Below the screen sits a pill-shaped home key that houses the fingerprint sensor. Think of this as an etched-out touchpad. It doesn’t depress or click; it simply senses your touch. There aren’t separate Back and Recent Apps buttons on its sides; you’ll have to tap once on the sensor to go back, hold down to go home and swipe sideways to multitask. This takes a bit of getting used to, but it’s worth learning now, since Huawei is not the only company implementing this method (the Moto G5 uses a similar format).

If that’s too much trouble, you can still opt for a set of onscreen navigation keys, which is the default setting for the larger P10 Plus. This feels more intuitive, but it makes the physical sensor redundant and confusing, since I still keep hitting it instinctively to go to the home screen.

Just as it has with the recently released Mate 9, Huawei has integrated artificial intelligence into the P10’s system. Thanks to the company’s custom octa-core Kirin 960 processor, the smartphone can learn your habits over time and divert resources like RAM and power to preparing the apps it predicts you will next open. During my month of testing, I most commonly used the P10 for taking pictures, looking at them in the gallery, and sharing them either on Instagram or to Google Drive. Switching between these apps is zippy, which could be a sign that Huawei’s algorithm is working well here (or, you know, that the processor and RAM are more than adequate for how I used the phone). Like I noted when I reviewed the Mate 9, though, this isn’t something you’ll notice until it doesn’t work. And it’s not as if the phone stuttered when I pulled up apps I didn’t use as frequently; in general, the P10 is responsive and multitasks well.

Capable performance and pleasant aesthetics are important basics to nail, but Huawei has come far enough that their delivering those is no longer surprising. What I wasn’t expecting, though, was the P10’s ability to take stunning pictures. When Huawei first teamed up with Leica to co-engineer the P9’s cameras in 2016, the result was underwhelming. Now the collaboration finally seems to be paying off. I’d actually reach for the P10 over my iPhone 6s every time I want to snap a pretty picture (or a gratuitous selfie). The P10 Plus has newer Leica sensors and a larger f/1.8 aperture than the regular P10’s f/2.0 setup, but I didn’t notice a significant difference in image quality other than more-saturated colors on the larger handset. Both cameras performed similarly well.

The P10’s rear features a 12-megapixel RGB sensor and a 20-megapixel monochrome sensor, similar to the setup on a handful of Android phones from ZTE and Xiaomi. Together, the cameras capture crisp, colorful photos with pretty bokeh, thanks to software that applies an artificial depth-of-field effect to pictures. From my experience, though, the iPhone 7 Plus is more accurate when it comes to identifying outlines of faces, while the P10 tends to be more muddy with its boundaries. It causes parts of my head, like my hair, to be blurred out along with the background. Still, the pictures look lovely, and the accuracy is already an improvement over the P9. Plus, it could easily be fixed with a software update. 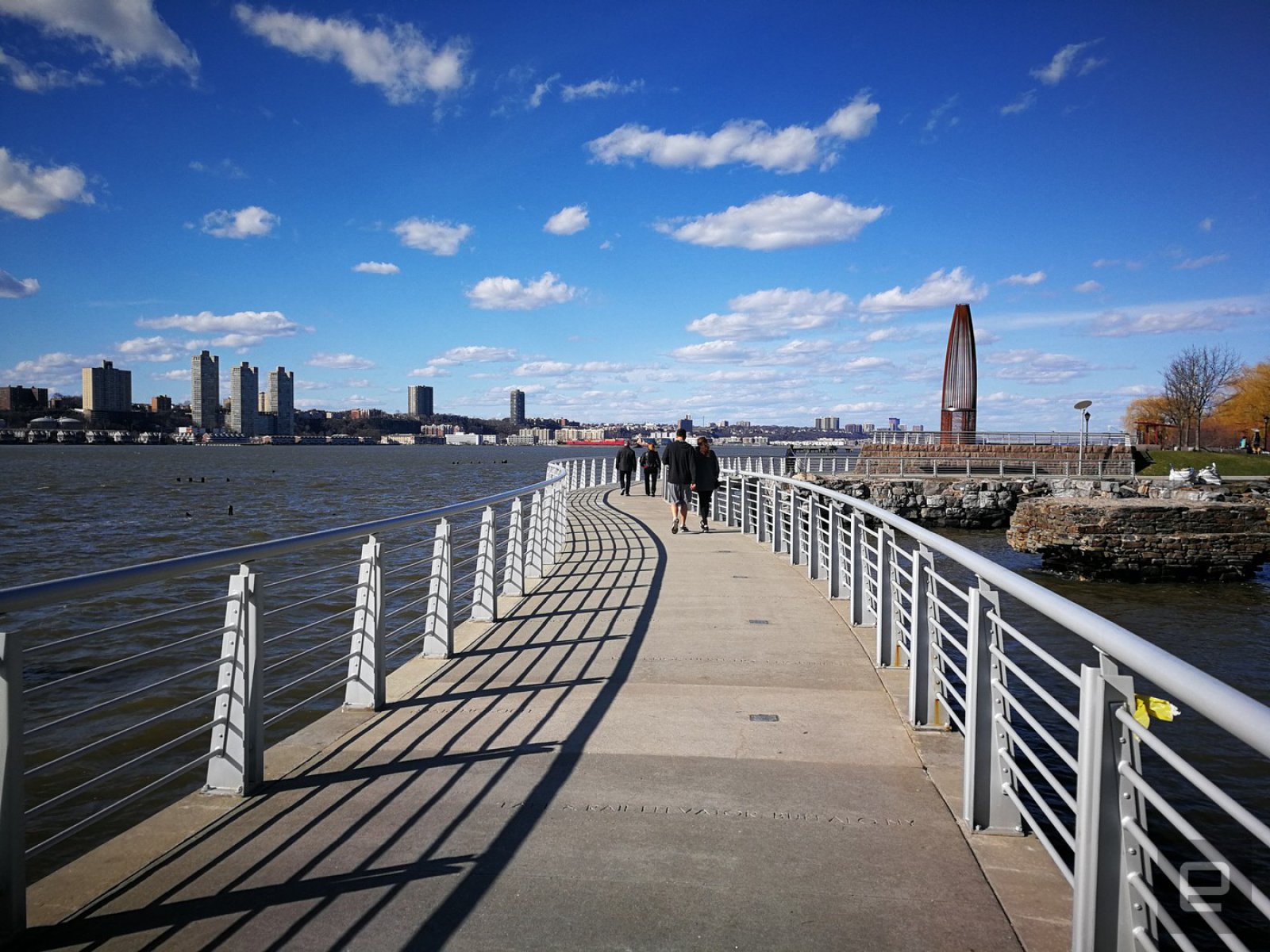 What the P10 does that the iPhone can’t, though, is apply that same soft focus to selfies. I was won over the instant I saw the results — they’re almost pretty enough to make me switch to Android. It sounds vain, but the front-camera integration makes getting the bokeh effect much easier, and is a bonus for anyone who wants better selfies.

The P10’s front camera also has a handy tool for group selfies that detects faces in the shot and zooms in or out to accommodate them. This feature was finicky in my testing and didn’t always work. When it did kick in, it did a good job of providing enough room for everyone in the picture, but it’s too unreliable right now to be useful.

Software is a big reason the P10’s pictures are superb. Its camera app features a trio of color profiles — standard, vivid and smooth — that let you take richer, more saturated images that are Instagram-ready without any edits. These sometimes result in slightly overexposed photos because of the high contrast, but you can always shoot in standard mode to avoid that. The P10 is also impressive in low light. Pictures of buildings at night displayed almost no noise — details were clear and colors were vivid. Portrait mode can introduce noise, but even there it’s minor.

There is very little to dislike about the P10 — even its battery life is satisfying. The regular P10 has a 3,200mAh cell, while the Plus packs a 3,750mAh one. During my testing, both phones easily lasted about for a day and a half of average use. But anytime I started playing games or watching videos on YouTube, that runtime dropped to a day at best. That’s still impressive, though, and recharging the phone is speedy enough, thanks to quick-charge support. I was surprised to see the P10 go from zero percent to 25 percent charged in a mere 15 minutes.

Ultimately, the P10 and P10 Plus are good-looking, responsive phones with excellent cameras. But they’re not perfect. I’m not a fan of the home key navigation, nor do I like the limited availability of Huawei’s unique color options. Plus, the handsets won’t officially be coming to the US. If you get your hands on one and stick an AT&T or T-Mobile SIM card in there, the phone will work, though you may not get full LTE speeds, since the radio isn’t optimized for US spectrums. Huawei has only just begun bringing its popular handsets stateside, so hopefully the P10 will make its way here soon.

FeedlyIFTTTTechnology
« Previous PostYouTube TV needs more channels, but it gets the basics right Next Post »Nvidia unleashes the Titan Xp graphics card – and it’s for Macs too