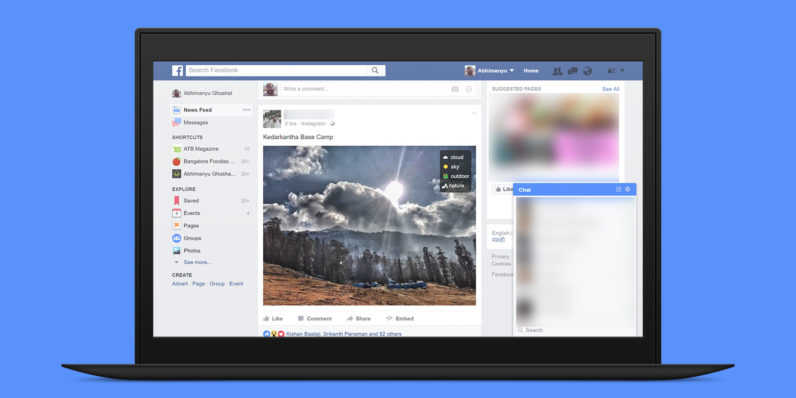 Between Facebook’s social network, Instagram, WhatsApp and Messenger, the company says its users share more than 2 billion photos each day. That’s a lot of content – and also a lot that visually impaired people don’t get to see.

To that end, Facebook spent 10 months building image recognition tech to analyze and tag photos with descriptions of their contents – and it’s pretty damn accurate. It helps blind users by making these descriptions available to screen reading software so they can understand what’s in the photos people have shared on their timelines and in their feeds.

You can now see just how good it is at recognizing people, objects, expressions, activities, events and spaces, thanks to a Chrome and Firefox browser extension built by California-based developer Adam Geitgey.

Install the extension, and it’ll display tags that Facebook uses as alt text for photos shared by users across its site, as overlays on each image. Facebook’s tech can figure out how many people are sitting or standing in a picture, whether they’re smiling or not, if the background is indoors or out, and whether there’s a baseball game under way in the shot.

Whether you’re curious about how powerful Facebook’s image recognition engine is, or want to know how photos might be perceived by blind users on the social network, this is a neat tool to try out. The extension is available from the Chrome Web Store and the Firefox Add-ons site.

FeedlyIFTTTTechnology
« Previous PostArtificial Intelligence: What It Is and How It Really Works Next Post »CES 2017: 9 of the biggest trends to watch out for