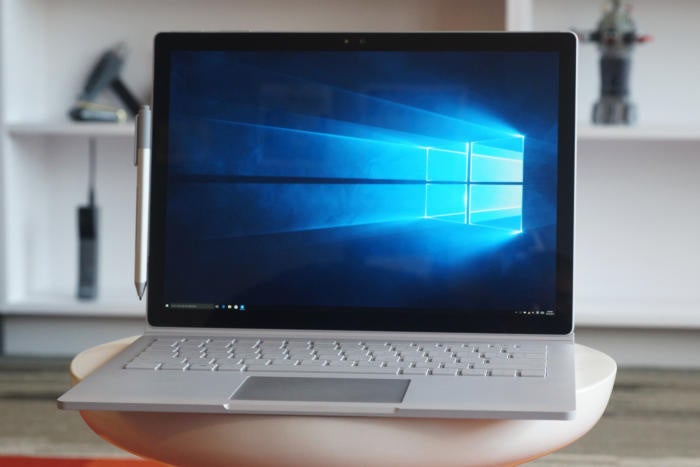 Microsoft today boasted that more customers than ever before had traded in an Apple laptop for one of its own Surface-branded devices.

“Our trade-in program for MacBooks was our best ever,” said Brian Hall, a Microsoft marketing executive, in a post to a company blog Monday. “The combination of excitement for the innovation of Surface coupled with the disappointment of the new MacBook Pro — especially among professionals — is leading more and more people to make the switch to Surface.”

Hall did not explain what he meant by “the disappointment” of the MacBook Pro — Apple launched new models Oct. 27 — but he was probably referring to the criticism by some reviewers, bloggers and customers who said the new systems lack the power and features they need, and are overpriced, even in the Cupertino, Calif. company’s usual premium pricing model.

The trade-in program Hall mentioned was the latest in a series of Surface marketing promotions Microsoft has aimed at owners of Apple personal computers. That offer, which ran from Oct. 28 to Nov. 23, gave buyers of a Surface Pro 4 or Surface Book up to $650 off if they traded in a MacBook Air or MacBook Pro.

Hall did not provide any data on the trade-in program that would have shown how much — in percentage or unit volume — it had exceeded previous deals.

Hall also cited other recent Surface sales victories. “November was our best month ever for consumer Surface sales,” he asserted. Although Hall did not elaborate on the size of the increase over previous Novembers, he implied that on the back of last month, sales for the quarter would meet or beat prior periods. Microsoft’s Surface record was set in the fourth quarter of 2015, when the company reported revenue of $1.35 billion.

In the same period, Apple sold $6.75 billion worth of Macs.

Without numbers from Microsoft, it’s impossible to get a handle on the significance of Hall’s assertions. But one industry analyst put the Surface and Mac lines in context.

“Clearly, Microsoft did really, really well, and gained some traction,” said Stephen Baker, an analyst with the NPD Group, which tracks retail sales in the U.S. “It just shows that if you get aggressive on price, you’re going to do well. But it’s got a way to go [to match the Mac]. Just look at the financial numbers.”

According to Baker, both Microsoft’s Surface Pro and Apple’s Mac lines posted retail sales increases in the U.S. during the week of Thanksgiving. Surface Pro sales were up 150% over the same week of 2015. Meanwhile, Mac sales were up about 20%. “I don’t see one outperforming the other,” Baker said.

He attributed the large increase in Surface Pro sales to starting from a smaller base than the Mac, but also credited lower prices for the notebook-tablet hybrid. According to NPD, the average sales price of a Surface Pro dropped from $1,150 in 2015 to around $800 this year.

The Mac’s average selling price, or ASP, went the other way: up. “The ASP went up $250,” Baker noted, to about $1,400, fueled by the higher prices of the new MacBook Pro models.

Apple did not respond to a request for comment on Microsoft’s claim that MacBook trade-ins were up, and the latter’s description of MacBook Pro sales.