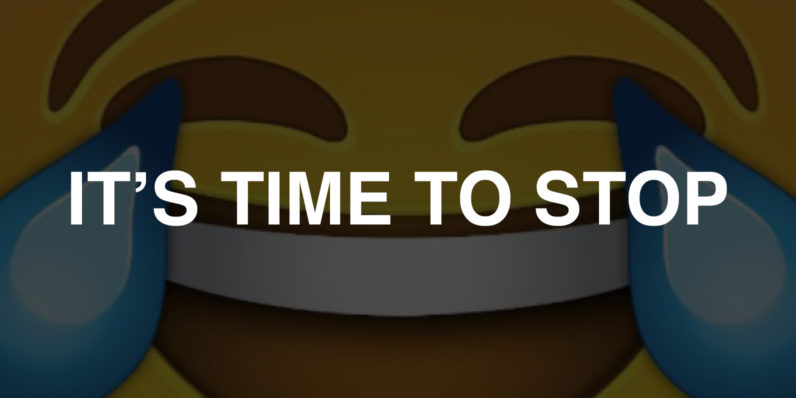 Ever since emoji took over a big part of our day-to-day communication, we’ve always struggled in putting it into correct use.

Don’t get me wrong — I absolutely love using emoji, and because so many people use it every day I don’t think it should be seen as anything less than a real language. I’ve reported on their quirky mistakes, coffee table books and easier ways to use them.

But as with many new languages, there hasn’t been a proper etiquette installed yet — that’s why your parents might use ? to talk about dinner, when you’re using it for something completely different.

And for one emoji, proper usage has always been a challenge. It’s most widely known as ?, but is officially called Tears of Joy.

It has grown to be the most hysterical, misused, obnoxious image macro in existence, and it’s time to put an end to it. It’s time to stop.

Nothing is ever this funny

On some rare occasions, you might actually cry from laughing when you see something online. But most often, you’ll probably let out a small ‘heh’ through your nose.

The ? should be reserved for those special moments when you actually ?. But this is how it ends up being used:

To be honest, you just end up looking obnoxious sending a barrage of crying, laughing yellow faces for no reason at all. In that moment, you’re just as oblivious to their correct usage as your emoji-illiterate parents.

It’s also probably the most-exploited emoji of all. If you go around Amazon, you’ll find an insane amount of companies offering ? merchandise to burn your money on.

The organization that controls emoji rules, the Unicode Consortium, isn’t getting any money off this — it’s just retailers sucking the soul out of emoji and putting it on stuff they can sell.

Just look at this terrifying spandex mask that looks like it was created in the worst part of emoji hell:

Or these abominable slippers:

It’s the Minion of all emojis. And if you didn’t know yet, Minions are the purest form of evil.

Just look at his smug face

I mean, if you’re over 14 years old and seriously use that thing in a message to me, don’t expect a serious reply. Instead, throw your phone in the nearest toilet. If it’s an iPhone 7, hold the flush button for a minute.

There probably was a time when ? was a decent reaction to something on the internet. For god’s sake, the Oxford Dictionary even named it word of the year without it even being, you know, an actual word.

But now you know better.

Next time, when you feel the urge to drop a ?, please don’t. Keep it to yourself. Get some help.