IBM: In 5 years, Watson A.I. will be behind your every decision 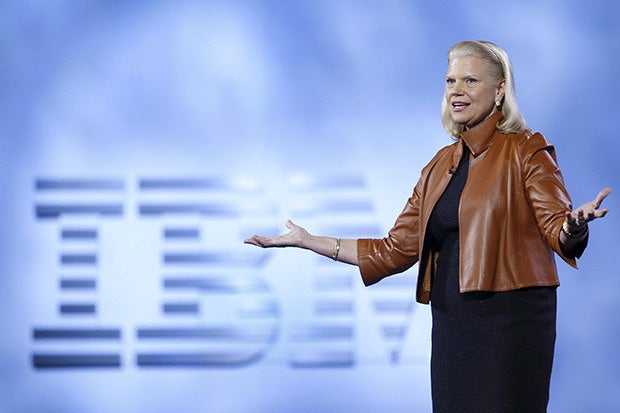 LAS VEGAS — In the next five years, every important decision, whether it’s business or personal, will be made with the assistance of IBM Watson. That’s the vision of IBM president and CEO Ginni Rometty, in a keynote speech at IBM’s World of Watson conference Wednesday.

The Watson system is set to transform how businesses function and how people live their lives. “Our goal is augmenting intelligence,” Rometty said. “It is man and machine. This is all about extending your expertise. A teacher. A doctor. A lawyer. It doesn’t matter what you do. We will extend it.”

IBM’s conference this week, which the company said drew 17,000 attendees, explored how companies, including retailers, educators, human resources departments and financial institutions, amon others, can use Watson.

“The challenge IBM has right now is to define the marketplace,” said Jeff Kagan, an independent industry analyst, who attended the conference. “Ten years from now, will IBM be the leader? Watson is the leader today but that’s easy… If they want to be a leader, they need to create the marketplace and the expectations.”

The A.I. market is young and malleable and Watson is the biggest name, pulling in users like General Motors, GlaxoSmithKline, Staples, Teva Pharmaceuticals, the American Cancer Society and the Cleveland Clinic.

“Every industry starts with a blank slate,” he added. “This is the blank slate. IBM is in a position right now to create a base everyone can build on. Some company has to create the base.”

Watson technology will touch hundreds of millions of people by the end of this year alone, IBM’s CEO said.

And in many cases, its user may not know it.

Mary Barra, chairman and CEO of General Motors, took the stage Wednesday with Rometty to talk about the company’s partnership with IBM to bring a cognitive element to its OnStar mobile platform.

OnStar, which has been around for about 20 years, provides in-vehicle communications, security, navigation, remote diagnostics and hands-free calling.

With Watson working behind the scenes on OnStar Go, drivers could get help avoiding traffic when they’re low on gas, have a cup of coffee ordered and paid for before they get to their favorite café and get a reminder to get off the highway two exits early to make it easier to stop at the pharmacy after work.

According to Barra, the Watson-based OnStar Go will begin rolling out in cars in early 2017, and by the end of that year “millions of vehicles” will have it.

“We believe in the auto industry, in a period of five years, we’ll see more change than in the last 50,” Barra said. “We see that as a huge opportunity to transform personal mobility… Think about taking [OnStar] to the next level, with it knowing you and your life and what you want to accomplish, and doing it seamlessly and safely. If we can take that commute time and allow you to be more efficient, it will transform that time.”

Rometty also said IBM’s moonshot is focused on healthcare, and she brought on stage Satoru Miyano, a professor of the Human Genome Center at the Institute of Medical Science in the University of Tokyo.

Miyano said researchers and doctors are faced with too much data. Last year, he said, more than 200,000 papers were published about cancer alone. Meanwhile, 4 million cancer mutations also were reported.

“Nobody can read it all,” Miyano said. “We feel we are a frog in the bottom of the well. Understanding cancer is beyond a human being’s ability, but Watson can read, understand and learn. Why not use it?”

Researchers are using Watson to cull through all the data and help clinicians find specific mutations in patients’ genomes and offer guidance in treatment.

Miyano gave the example of a 66-year-old woman with leukemia. She was receiving standard therapy but was still getting worse. Doctors didn’t understand why she was getting sicker.

Using Watson, researchers analyzed all of the data they had on the woman in 10 minutes.

“Watson’s results were investigated, targeting specific genes,” Miyano said. “The team found she had another type of leukemia [that needed] a different therapy. She got it and she recovered completely.”

Rometty said she expects Watson to “change the face of health care” in our lifetime.

This story, “IBM: In 5 years, Watson A.I. will be behind your every decision” was originally published by