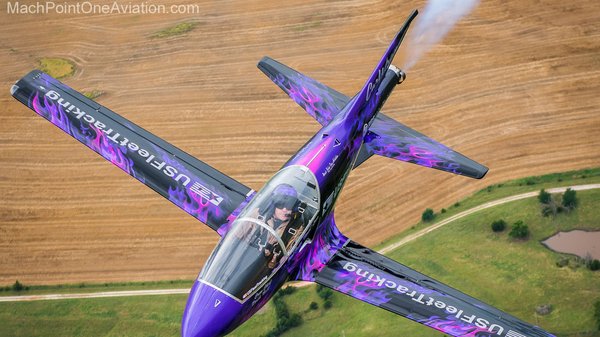 One of the big hurdles to owning an airplane is that most of the commercially-available options are relatively big machines. Even a modest 2-seater will likely have a 100-horsepower engine and wings spanning more than 30 feet. Sizeable portions of your budget must be allocated just to keeping the bird fueled and stored. The obvious solution is to create a smaller airplane – something like a moped of the skies. With that goal in mind, many cost-conscious aviators have designed a motley collection of impossibly small airplanes. Here are four examples of downsized birds that will make you thankful for the middle seat on your next airline flight.

Frenchman Henri Mignet set out to design an airplane that would be as affordable and easy to operate as a Ford Model T car. Mignet wasn’t afraid to try new ideas. His diminutive HM.14 Pou du Ciel (Louse of the Sky, aka Flying Flea) emerged in 1933 with a very unusual tandem wing configuration. The method for controlling the HM.14 was also unique. The entire forward wing was pivoted up or down to control the pitch of the airplane. Movement of the large rudder was accomplished through the control stick (rather than traditional rudder pedals) and there were no ailerons for roll control. The Pou du Ciel would roll into a turn naturally when rudder was applied due to the dihedral effect of the wings’ upward curvature (when viewed from the front). 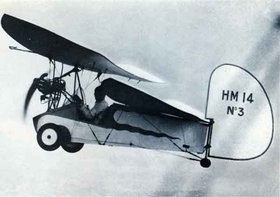 Mignet self-published plans for his unusual design. With just a 20′ (6.1m) wingspan, the Flying Flea could be built in a barn or garage. Numerous amateur builders throughout Europe and the US began doing just that. Problems started to arise, however, when builders made modifications to Mignet’s original design. Some builders, ignorant of how the curvature of the wings was vital for the airplane’s stability and control, assembled flat wings. Other builders utilized engines that were much more powerful than the 17-horsepower motorcycle engine originally used by Mignet. The higher speeds afforded by these engines sometimes caused control reversal situations. When this happened, pulling the control stick back to climb would actually cause the airplane to dive. The situation would quickly degrade from that point on…often ending in a crash.

A string of fatal MH.14 accidents stirred some countries to outlaw the design. Although these accidents were generally caused by unauthorized changes, the Flying Flea gained a widespread reputation as an unsafe airplane. Despite this negative aura, the MH.14 persevered. In fact, the control reversal problem was eventually understood and corrected, making the Flying Flea safe for beefier engines. In the decades following its introduction, the HM.14 underwent continuous evolution to keep the design contemporary. DIY-minded pilots with a flair for the unusual have built countless adaptations of the Flying Flea. 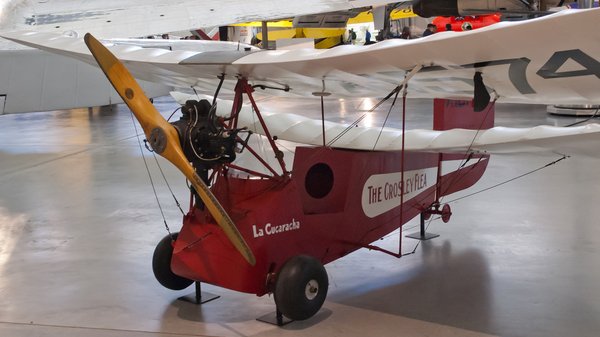 Numerous Flying Fleas have been built around the world. This example at the National Air and Space Museum was built in 1935.

Jim Bede (pronounced "bee dee") was already a veteran of the homebuilt aircraft market when he began to create the BD-5 series of airplanes in the 1960s. While his previous designs were not particularly unique in their layout or performance, the BD-5 promised to be a sub-compact hot rod. Original estimates predicted that the BD-5 would cruise at more than 200mph (322kph) with just a 40-horsepower engine.

Even ignoring the miniscule size of the airplane, the original concept for the BD-5 included numerous features that were quite unique. Among these were a V-tail, interchangeable short and long wings, and a mid-mounted motor with a long shaft connecting the pusher propeller in the rear. The motor and shaft configuration persevered, although it had to be modified to address vibration problems. The V-tail and swappable wings eventually gave way to more conventional arrangements.

The Bede BD-5 promised high performance in a sleek, low-cost package. Thousands of kits were sold, but problems with engine vendors prevented many from being completed and flown. (photo courtesy of Juan Jiménez of BD5.com)

In spite of the necessary changes, the "watered down" version of the BD-5 was still very stylish and prompted a lot of attention from potential buyers. Hundreds of eager pilots put down deposits on kits to build a BD-5 of their own–even before the prototype airplane had flown. When Bede announced his intent to manufacture fully-built airplanes, another wave of preorders come rolling in.

A factory-built version of the BD-5 never materialized, but several thousand kits were delivered starting in 1973. Persistent problems with engine vendors meant that many builders had to find their own power plant. There were also problems with some incomplete kits being delivered…not to mention that assembly of the kits was much more time-consuming and difficult than advertised. The end result was that only a small percentage of the kits were actually completed and flown. 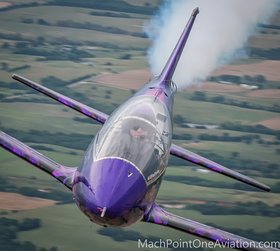 The jet-powered BD-5J was a popular marketing tool in the 1980s and 1990s. Some examples still perform at airshows. (photo by Glenn Watson of Mach Point One Aviation)

The BD-5 delivered on its high-performance claims, but it was a demanding airplane to fly. Although not recommended, four BD-5s were built with the shorter 14’3" (4.3m) wings while others used the 21’6" (6.6m) option. All four of the short-wing BD-5s crashed on their first flight. The initial examples of long-wing BD-5s fared better, but still had a high accident rate.

A jet-powered variant, the BD-5J, garnered worldwide interest thanks to its starring role in the 1983 James Bond movie, Octopussy. The BD-5J was also used as a promotional tool at airshows throughout the 1980s and 1990s (remember the Coors Light Silver Bullet?). It is still recognized as the world’s smallest jet. A handful of BD-5Js and propeller-driven BD-5s are still flown today.

Another tiny French design is the Cri-Cri (Cricket). It is recognized as the smallest twin-engine airplane in the world. The strange proportions of the Cri-Cri make it appear like a whimsical caricature of an airplane. But it is indeed a real machine with a loyal following of admirers. Despite its unusual looks, this micro-flyer is capable of impressive aerobatics while using just two 15-horsepower chainsaw engines.

Designer Michel Colomban introduced his 16′ (4.9m)-span airplane in the early 1970s to slack-jawed onlookers. Numerous examples have been built by pilots around the world. It is constructed using a combination of foam and aluminum. 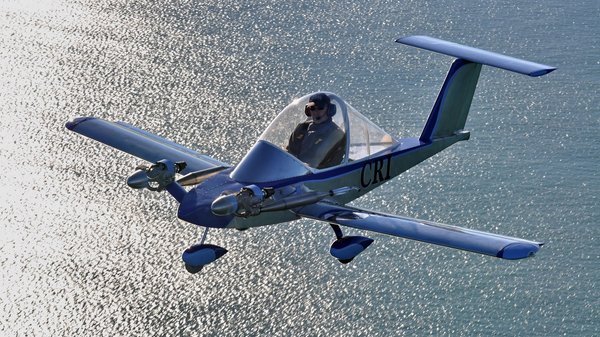 The Colomban Cri-Cri is a very popular mini-plane. It is capable of aerobatics using just two 15hp chainsaw engines for power. (photo by John King, provided courtesy of Wayne Butt)

One of the most remarkable things about the Cri-Cri is its ability to utilize a wide variety of engines. One example was equipped with four electric motors arranged in two coaxial pairs, and a Lithium-Polymer battery. This was the first electric airplane to cross the English Channel…doing so just hours before the much-publicized Airbus E-Fan made a similar successful crossing.

Other Cri-Cri examples have been outfitted with small turbine engines that were designed for RC models. With either the jets or the chainsaw motors, the airplane can climb on just one engine. That is the sort of performance and adaptability that continues to make the Cri-Cri popular more than 40 years after its introduction.

If you thought that the previous examples of tiny airplanes were ridiculously small and misshapen, you’ll hardly believe the Stits SA-2A Sky Baby. This is an airplane so small and cartoonish in appearance that you would swear it was meant to be a 1-token ride in the toddler’s section at Chuck-E-Cheese!

The SA-2A evolved in 1952 with the specific goal of creating the smallest possible man-carrying aircraft. What emerged was a biplane less than 10 feet (3m) long with a wingspan of just 7’2" (2.2m). The nose of the Sky Baby was so short that the souped-up 112-horsepower engine was practically in the pilot’s lap. 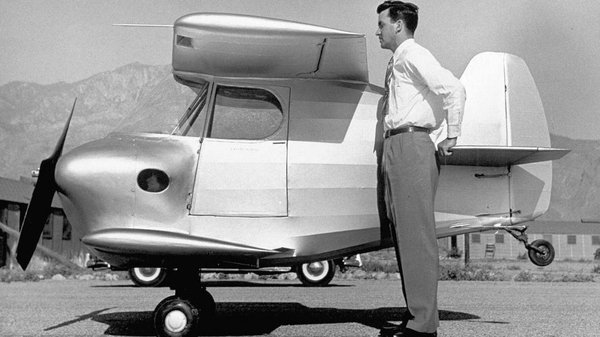 The Stits Sky Baby was one of a series of ever-smaller aircraft built by Ray Stits and Bob Star. They traded the record for the world’s smallest airplane multiple times.

This airplane was a combined effort between Ray Stits and Bob Starr. It was just one of several airplanes that Stits and Starr built both together and individually…each one smaller than the last. Stits’ son, Donald also participated in the decades-long challenge to build shrunken airplanes. The younger Stits is credited with the smallest monoplane, his 6’3" (1.9m)-span Baby Bird, which was first flown in 1984. Starr’s 1988-vintage, 5’6" (1.7m)-span Bumble Bee II holds the record for the smallest biplane. The Sky Baby and Baby Bird are now in museums. The Bumble Bee II was destroyed in a crash which also injured Starr. 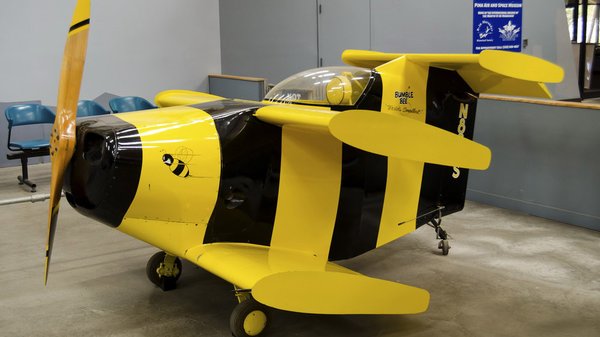 As you have seen, tiny airplanes are indeed possible. They’re just a bit dangerous in some cases. Even so, the demand for affordable personal aircraft has not diminished. Paraplanes offer a safe and relatively inexpensive alternative for those who aren’t in a hurry. You could even count wing suits as a new (insane) innovation in small aircraft. In what direction will builders of micro flyers head next?

Terry is a freelance writer living in Lubbock, Texas. Visit his website atTerryDunn.organd follow him onTwitterandFacebook. You can also hear Terry talk about RC hobbies as one of the hosts of theRC Roundtablepodcast.