Next-gen concrete bends instead of cracking 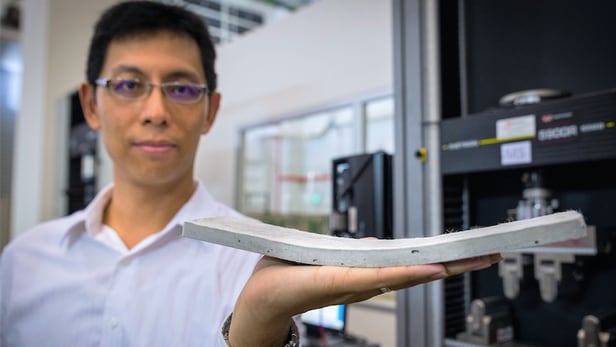 Concrete may generally be a good choice for sidewalks, but it is a brittle material – this means that it needs to be poured thick, in order to keep those sidewalks from cracking under pressure. Scientists from Singapore’s Nanyang Technological University, however, are developing an alternative. They’ve created bendable concrete that they say could be easily applied in the form of relatively thin, light paving slabs.

Ordinarily, concrete is made from a mix of cement, gravel, sand and water. The new material, known as ConFlexPave, additionally contains polymer microfibers. These are thinner than the width of a human hair, and serve to distribute loads evenly across the entire slab, instead of keeping them focused in one location.

As a result, the ConFlexPave is reportedly "tough as metal and at least twice as strong as conventional concrete under bending." As an added benefit, the microfibers are also claimed to enhance the material’s skid resistance.

The researchers envision the slabs being manufactured ahead of time in a factory, and then simply being brought to construction sites and laid down as needed. This would not only be less labor-intensive than pouring traditional concrete, they say, but it would also take only about half the amount of time. When damage did eventually occur, individual slabs could just be pulled out and replaced – as is already the case with brittler regular concrete paving slabs.

ConFlexPave has so far been tested in the lab, using tablet-sized pieces. There are now plans to install full-size slabs in locations around the university campus, to see how they stand up to pedestrian and vehicular traffic over the next three years.