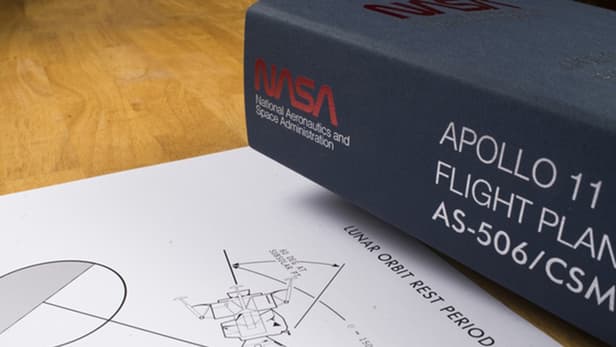 It’s hardly surprising, but it’s not easy – or cheap – to get your hands on authentic Apollo 11 memorabilia. A team based out of Melbourne, Australia is trying to change that by reproducing the original Apollo 11 flight plans, right down to the paper stock, fonts, line spacing and positioning on the page as the originals.

The idea to recreate these flight plans came from someone who, having scoured the internet, was unable to find an accurate copy of the original plans. The team at Reproduction IO wasn’t impressed with the quality of current reproductions, arguing they take "a hit and miss approach," which ultimately "doesn’t stay faithful to the original design and layout."

Although all 362 pages have been recreated accurately, a little bit of artistic license has been taken with the binder on the outside. For backers chasing picture-perfect period accuracy, the original cover graphics have been lovingly recreated in soft-touch fabric. Alternatively, there are a few covers with modern, stylized designs for a bit more impact on the coffee-table.

Currently, the project is live on Kickstarter, where it’s already raised AU$259,700 (US$197,550) with 14 days remaining. Considering the team was only asking for AU$15,000 to start with, it’s safe to say there’s plenty of support for the project.

Pledges start at AU$99 (US$74), which gets you one copy of the flight book. Pledging more gets you more copies of the book, which should be delivered in December this year if everything goes to plan.

A video outlining the project’s goals is below.

FeedlyIFTTTTechnology
« Previous PostUber is investing $500M in alternative to current maps like Google's Next Post »Photo tip of the day: This app lets you know when to take the best photos